Daman Mills
Revel (ルベル, Ruberu?), or the Angel of Emotion (感情の天使, Kanjō no Tenshi?), was a first-rank angel. He was one of the thirteen angels who selected Saki Hanakago as his God candidate. Before he was promoted to first-rank, Revel was a second-rank angel known as the Angel of Trickery (策略の天使, Sakuryaku no Tenshi?). 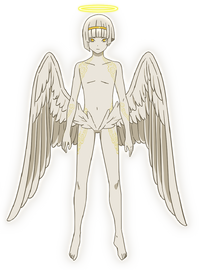 Revel had an androgynous appearance. He grew bangs with his chunky ear-length hair and secured his white locks using a golden headband. He had upside down wings that came from his hips, a golden halo above his head, and golden frilled marks on his body. His eyes were thin and he had long lashes, making him often look taunting.

Community content is available under CC-BY-SA unless otherwise noted.
Advertisement