Platinum End Wiki
Register
Don't have an account?
Sign In
Advertisement
in: Pages with reference errors, Characters, Humans,
and 3 more

Edit
watch 01:36
We're Getting Mutants in the MCU - The Loop
Do you like this video?
Play Sound

"The Big Reveal"
Shogo Hatakeyama is a human who was selected by the angel Emaka to be a God candidate.[1] 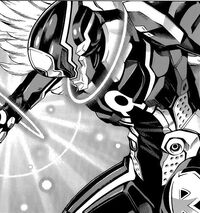 Hatakeyama is a young man with medium-length dark hair and a stubble. He is most often seen wearing a track suit. When he wants to keep his identity hidden, Hatakeyama wears a costume that disguises him as the TV superhero Metroblue. Like Metropoliman's costume, Hatakeyama's Metroblue costume completely obscures his body and facial features, leaving his identity a secret.

After flunking the entrance exam for his college of choice for the third time in a row, Hatakeyama met Saburo Tabuchi, who had failed the exam for his first time. In his grief, Tabuchi revealed to Hatakeyama that he was in possession of a drug that would allow him to commit suicide and Hatakeyama, unable to bear the shame of failure, agreed to a suicide pact. However, before they could commit suicide together, they were visited by two angels who offered to make them god candidates. Enticed by the idea, Hatakeyama and Tabuchi accepted, and made a new pact with each other, promising to make the other happy if either of them became the next God.

After seeing Metropoliman's TV address, inviting his fellow god candidates to meet with him in Jinbo Stadium, Hatakeyama and Tabuchi decided to accept his offer and try to defeat him at the meeting. On the day of the meeting with Metropoliman, Hatakeyama and Tabuchi arrived in disguise as the TV superheroes Metroblue and Metroyellow. Hiding among the crowd of spectators, they waited to reveal themselves until Metropoliman arrived, at which point they revealed themselves.

After watching Metropoliman's address from the stadium's jumbotron, Hatakeyama came to the conclusion that Metropoliman would not be appearing in the stadium, and decided to instead take his decoy for interrogation. After making one final plea to the audience for any god candidates to reveal themselves, he is surprised to when a little girl reveals herself as a candidate. Hatakeyama tries to shoot her with his arrow to ensure she is not a danger, but is interrupted by Metropoliman, who arrives long enough to shoot her with a red arrow and leave with her.

Appealing to the audience again, Hatakeyama is able to convince two more candidates, who are dressed as Metropink and Metrogreen, to join him. After shooting them with a red arrow, Hatakeyama and Tabuchi return to the center of the field to collect Metropoliman's stand-in. However, he is distracted by another announcement from Metropoliman on the jumbotron, and isn't able to react in time to stop the real Metropoliman, who has switched himself with his double unnoticed, from shooting him in the head with a white arrow.Cite error: Invalid <ref> tag; refs with no name must have content

Community content is available under CC-BY-SA unless otherwise noted.
Advertisement